A confluence of factors has resulted in India becoming one of the key centres globally for start-ups and innovation. Innovation, venturing, and entrepreneurship is getting increasing attention from policy makers. These three areas of economic activity are expected to play a key role in the economic growth of the country apart from strengthening India’s position as an innovation country. Because of these, there has been a fillip to the start-up activity in the country. Formulation of start-up policies, setting up of incubation centres, growth in investments, and focus on entrepreneurship in academic curricula, have led to an increase in the number of start-ups. However, growth of ventures and entrepreneurship in India so far has been predominantly led by policy and practice.

A look at the investment in Indian ventures helps to put things in perspective. For the 10-year period, 2011-20, the risk capital investment in Indian technology start-ups has been about $68 billion, which approximately translates to ₹476,000 crores. Academic research and thinking can play an important role in sustaining and furthering this growth in entrepreneurship. Insights and evidence from academic research would support policy making as well as increase the effectiveness of managerial and investment decision making in entrepreneurship. The objective of the CREST is to augment academic and thought leadership in innovation, entrepreneurship and risk capital. 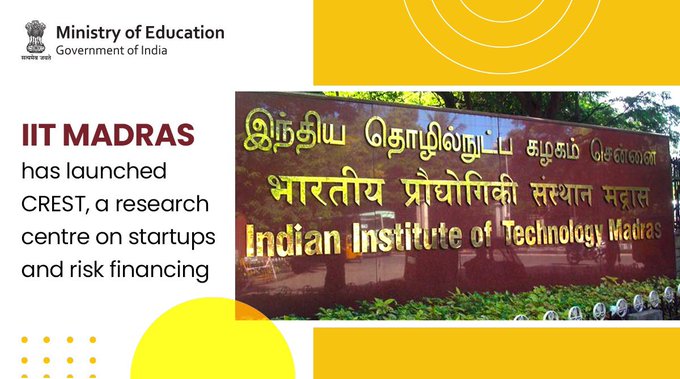 Dr. Ramesh Pokhriyal Nishank on Twitter
IIT Madras has announced the launch of CREST (Centre for Research on StartUps and Risk Financing), a research centre to provide academic and thought leadership in innovation, entrepreneurship, and risk capital.

Get Our Email Updates

Centre for Research on Start-ups and Risk Financing (CREST)